High-fashion luxury brands like Gucci often showcase unique fashion designs that are totally outside of the box of what is considered to be expected.

While this is thrilling for fashion enthusiasts, ordinary everyday people can find it a little odd. This is especially true when it comes to the models that are used in runway shows as well as campaigns.

Often the models can look weird with either the use of unique props or strange hair and makeup.

High-end fashion brands want their fashion models to make a unique statement. With Gucci, they like to lean into the androgynous look for their models, which adds a special edge to their fashion. Luxury brands also tend to set future fashion trends, so they like to make their models look futuristic. 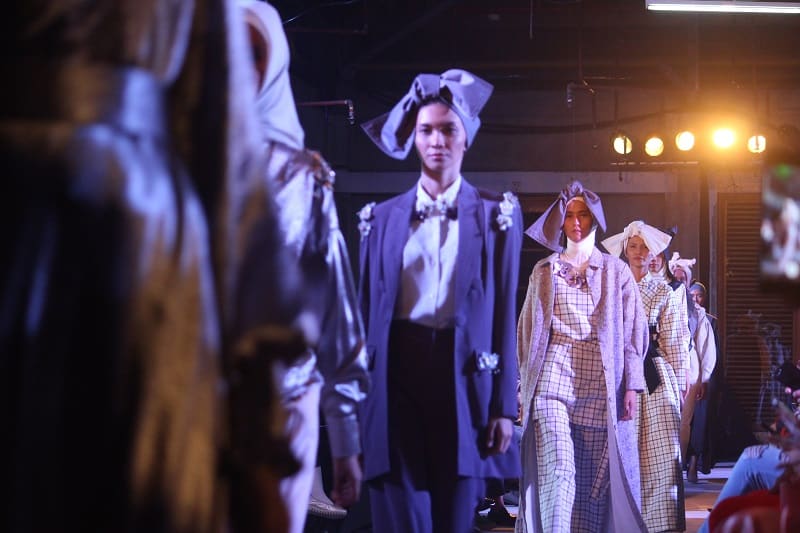 What Is The Idea Behind The Weird Gucci Catwalk Outfits?

This created a huge buzz in the fashion world because of the mixture of elegant designs with slight horror and unique props. However, anyone following the wonderfully weird fashion world knows that this is something that Gucci often does.

Gucci has used ski masks, dragons, and even full-body prosthetics in their runway shows, and there are a few different reasons for the wacky catwalk outfits you see.

First, and most notably, Gucci wants people to talk about them.

Keeping people guessing and showcasing the unexpected is a great marketing tool for any brand. While Gucci does depend on celebrities and events to sell its clothing, they also need to reach the average market.

Everyone wants to be in on a trend. When people are talking about Gucci, and not just people within the high-fashion circle, everyday people want to be in on the conversation too.

This not only helps to increase Gucci sales but also helps to reach a much wider audience.

Staying Ahead of the Competition

However, it isn’t just consumers that Gucci is trying to engage with by showcasing weird and outlandish styles on the catwalk.

When Gucci does something weird, like back in 2016 when they had their models wear pearl-encrusted gas masks, they force themselves to the front of everyone’s attention which keeps them relevant.

Hundreds of designers put on a show during huge fashion events like Paris Fashion Week to unveil their newest and greatest designs. With so many labels, designers, and fashion houses in the mix, it can be hard to get a leg up.

Are They Really Just After Grabbing Attention?

While getting attention from the public and the media is the main reason you see so many unique and outlandish fashions on the Gucci runway, that isn’t the only reason for some crazy looks.

Unlike fast or commercial fashion, luxury fashion, at its core, is an art form.

Not only do luxury brands like Gucci try to make their mark on the world of fashion, but they also want to make other statements, like on the current political climate or human rights issues.

In 2020, Gucci made a bold political statement by having their models feature covered mouths meant to represent the silencing of marginalized communities.

But, sometimes, the art and political statements that Gucci tries to make are not met with a warm reception,

In 2017, Gucci made waves by having their models wear straightjackets on the runway. This time, Gucci missed the mark because the mental health community did not like their representation.

Whether or not you agree with the statements Gucci tries to make, they did their job because, to this day, people are still talking.

Why Is The Runway Different From What Gucci Stores Sell?

What you see on the runway is not considered to be “ready to wear” clothing and isn’t available in stores. They are only worn at award shows or fashion galas.

The main reason fashion on the runway differs from what you find in stores is money. The designs you see on the runway not only take hours of meticulous skill to hand-place every stitch, but it also costs a great deal of money to produce each piece.

A team of designers works together to put together each outfit you see down the runway. If the designer were to replicate each piece for retail, it would cost way too much to mass produce and way too expensive for the average consumer to buy.

However, this doesn’t mean that what you see on the runway isn’t reflected in what you can buy in stores.

Luxury brands like Gucci often nod slightly to their catwalk designs in their ready-to-wear clothing. This is often done through the same colors, patterns, and shapes you see on the runway.

So, while you can’t buy what you see on the runway, you can get the essence of what the designer intended by purchasing a piece from the store.

Why Did Gucci Models Carry Heads?

Gucci literally made heads turn when back in 2018, they had models draped in expensive Gucci hand-stitched designs while holding rubber-replicated severed heads. While critics considered this a quick way to grab attention, there was a bigger reason.

Behind this wild stunt, Head Gucci designer Alessandro Michele explained that the choice was made to promote a deeper conversation about mental health.

In the past five years, mental health awareness has found itself at the forefront of conversations which has helped to remove the stigma surrounding struggling mentally.

Gucci chose to have their models carry 3-D printed heads to say that “If you can’t carry yourself, how can you expect anyone else to carry you? ”

While this message may have seemed a little bit too “on the nose,” the result was what Gucci had hoped for. Not only were people talking about what they saw, but the more important conversation about how we can normalize struggling people is what stands out most from this fashion stunt.

Should We Expect More Weird Fashion From Gucci?

Every year, Gucci finds brand new ways to shock people, and certain events like the “head carrying” fashion show keep finding their way back into the forefront of conversations.

The best example is to look at all the past fashion statements they have made. Each year not only seems to elevate and increase weirdness but also gets more and more people talking.

More people today know about the Gucci brand than even ten years ago. This not only helps to increase Gucci’s popularity but also increases its overall market value.

When it comes to Gucci and its outlandish runway looks, it is safe to say that you will never know what they will do next to shock you.

Fashion truly is an art form; much like art, everyone is free to interpret it the way they want, and brands like Gucci want to keep people talking.

Why The Runway Outfits Don’t Sell In Shops