In uncomfortable or strange conversations, often, we will attempt to avoid weird questions by asking someone our own.

Answering a question with a question helps evade uncomfortable topics. A genuine question posed to the other party is a gentle hint that you would prefer not to discuss what they are asking you, but it can be rude. Furthermore, if you misheard someone, you may ask them a question for clarification.

In this article, we will explore why people answer questions with other questions: 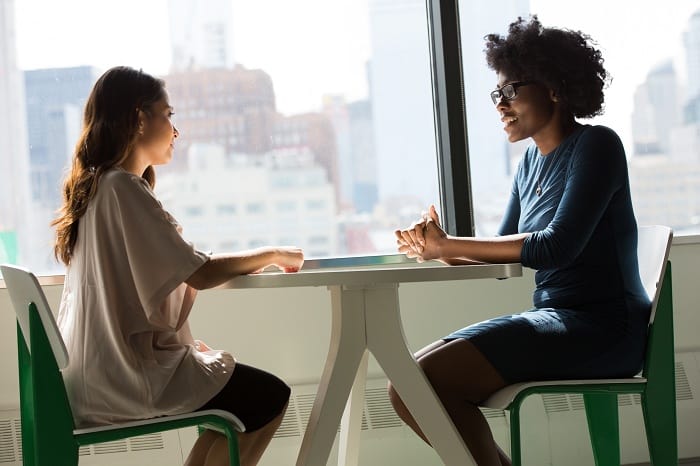 Reasons Why People Answer Questions With a New Question:

Many people have accidentally answered a question with a question, and some have even done it on purpose.

There are a few reasons why you would do this, which we’ve outlined here:

You might also have just misunderstood the person’s question, and may simply reply with “what?” or “can you repeat that?”. These questions are normal and are part of many interactions, both online and in person.

Often, answering a question with a question can be considered rude; however it can also confuse or make the other person in the conversation uncomfortable.

What is it Called When People Answer a Question With a Question?

Many people refer to this phenomenon of answering a question with a question as Evasion.

Evasion is the act of attempting to avoid a topic, person, or situation by steering the question in a direction that will ultimately lead the conversation to a false conclusion.

It can also mean that you are attempting to prevent having to answer a question by making the conversation so nonsensical that it becomes futile for the other person to continue on with the discussion – opting instead to drop the subject entirely.

Evasion is often used within the context of interrogations or legal proceedings and is a way that criminals attempt to avoid answering a question that may incriminate them, often saying something vague or offering another question instead of information.

However, evasion doesn’t always mean that you have done something bad – instead, you might just want to get out of an uncomfortable or boring conversation.

However, answering a question with a question can be rude and may off-put the person you are trying to avoid so much that they may not want to have conversations with you later.

How Do You Answer People With a Question?

Depending on the situation that you’re in, you may want to easily evade a question by answering with a question of your own.

These can be questions related to the current topic being discussed, or they could be totally off-topic questions that make it clear you’d like to change the subject.

For example, if someone were to ask you:

In this situation, it is very clear that you are changing the subject, and usually, the person speaking to you will understand that.

They will most likely move on to the new topic with you, or if they really are insistent, they may ask again.

However,  if you are looking to evade a conversation that makes you uncomfortable, you could try to ask a question that helps get you out of the conversation a little more abruptly.

This question that you’ve posed the person is a way to evade not only the conversation but the situation entirely if you want to leave it.

Just remember, if you are going to interrupt the flow of conversation with a question fired back at the person you’re talking to, you may end up damaging the relationship you have with that other person – as answering with questions can make people uncomfortable or angry.

What Are Some Examples of People Answering With a Question?

As we’ve mentioned, there are many ways to answer a question with a question.

To simplify, we’ve listed a few different themes of questions people answer with:

This falls under the category of “what?” and “can you repeat that?”

These are genuine questions that you ask when you didn’t hear the person the first time and are answering with a question of your own.

This is not considered rude.

As we mentioned before, you may ask a completely off-topic question if you are avidly trying to avoid the conversation and make it clear that you are doing so.

For example, if someone asks you about how your job is going, and you respond with a question about recipes for fried fish, the person talking to you will either realize that you don’t want to be part of the conversation, or they will assume that you completely misheard them.

You may also show them that you are very disinterested in answering that particular question, so they may shift topics for your sake.

An On-Topic but Separate Question:

These questions show that you are interested in continuing the conversation with the other person, but perhaps not that specific question.

This can happen when you are having a pleasant conversation, and someone asks something strange, or that makes you uncomfortable, but you don’t want to necessarily escape the conversation.

For example, if someone asks you about one of your family members who is having a hard time with illness, you may respond with “actually she needs help with her roof, do you know how to patch one up?”.

This shows that you are still interested in the conversation and speaking to them, but would rather not talk about the sensitive question that they have posed.

Is it Considered Rude to Answer With a Question?

It is often rude to answer a question with a question if you are very clear that you DON’T want to answer whatever they have asked you.

However, if you are answering a question with a simple “what?” or “can you repeat that?” it is not rude, and in fact, is still continuing the conversation along. If you are pretending not to have heard the person and keep pretending you can’t hear them, this can be considered rude.

Furthermore, if you are trying to get out of a situation with a person – such as someone who you don’t like or who won’t leave you alone – sometimes being rude and posing unnecessary questions at your conversation partner will give them a hint that you are leaving and no longer want to be part of the interaction.

This would be a situation where you would ask, “why are you asking me that?” or “what time is it? I should go,” and other responses.

However, it is important to remember that if you use this tactic on someone, they may not appreciate it, and it can hurt your relationship.