Diaries have wrongly been considered a feminine art for a few hundred years, but journals and diaries have been around since ancient civilizations started writing and keeping track of accounts.

Men and women will journal or write in diaries, both in the past and today.

Men have kept diaries for business purposes for centuries. Only now do men keep them for personal reasons, too. Men use diaries just like women, whether they are jotting notes, feelings, inventions, or using them for therapy, art, or story ideas. 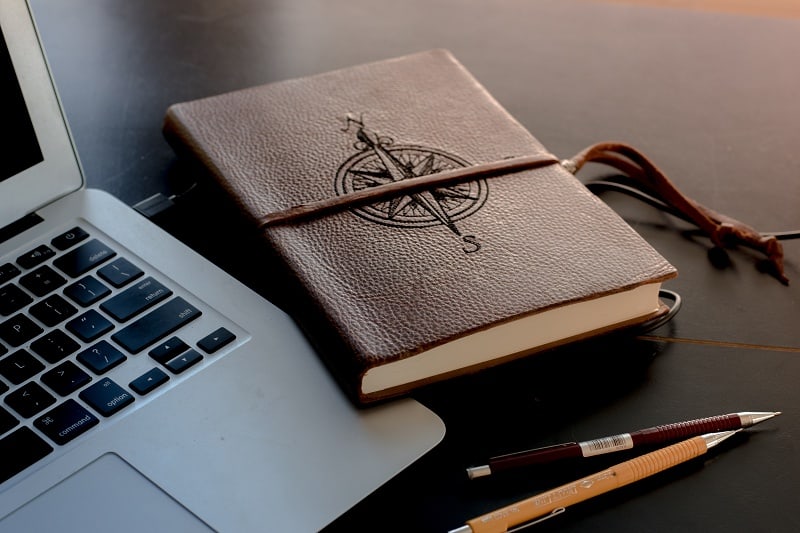 A Brief History of the Diary:

Diaries, logs, journals, and other forms of written notetaking have been around since ancient Egypt, the first being a logbook titled: The Diary of Merer.

This was an account of the transportation of limestone from Tura to Giza. Like this one, most early logbooks were for business purposes or accounting, usually to mark the transactions between individuals and update business records.

Other types of logs were from spiritually devout members of society who would keep diaries as logs of their journey in faith or what they learned when training to become church officials.

As time passed, these loggings took on new forms.

The most famous “diary-esque” account in history was written by Marcus Aurelius, the Roman Emperor who ruled in the 2nd half of the 2nd century. Now titled “Meditations,” or “To Myself,” as it was called, this diary was a series of more personal writings that focused on his guidance and self-improvement journey.

In Victorian-era Europe, many women took on the writing of a diary to record their daily activities or personal thoughts and feelings, which the patriarchal society may have overlooked that they lived in.

It was considered improper for women to read or write “serious” literature or history. So diaries were a great escape for many women who wanted to record their thoughts or write stories, such as Jane Austen.

How Common is it for Guys to Keep Diaries?

Leonardo da Vinci kept – supposedly – thousands upon thousands of pages of notes, ideas, inventions, and collections of his thoughts and drawings. Bill Gates purchased a collection of his notes for $30 million in 2015, lending credit to the value of male-written journals or diaries.

So, how common is it for the modern man to keep a diary now?

Modern men are likely to keep journals or diaries – especially creatives or men who write or author books. Journaling or keeping a record of daily accounts is not a gendered act but rather a human one.

The need to leave a trace of ourselves, keep memories, and record our thoughts and ideas is so common that people now do it all the time in the public eye for everyone to see: social media, anyone?

Moleskin notebooks are popular for a reason, sporting gender-neutral designs to entice anyone to pick one up and start journaling.

Just because men are men doesn’t mean they don’t want their voices to be heard. Or, even more importantly, their thoughts to be stored but NOT shared.

Is it Socially Accepted Among Guys to Keep a Diary?

Men view other men with such rigorous rules and requirements that it is impossible to keep up with what is “socially acceptable” or what is not.

Because the word “diary” is considered feminine, men who keep diaries or write in them are accused by other men of being feminine, gay, girlish, or “less of a man.” Not only is this idea completely false, but it also insults women and gay individuals who are being used as examples as “lesser beings” that men should never want to be compared to.

Some men appreciate the journal or diary and do not care if other men keep diaries. These are usually academics or creatives, people who jot down notes or ideas because it is part of their job or passion.

Men of science will keep logs that document their findings, authors will carry a notebook filled with ramblings, poetry, or book ideas, and artists will journal alongside sketches or watercolor paintings.

These could all be considered a “diary” and are highly socially acceptable to men in university or professions requiring journals to be commonplace.

Why is Journaling Typically Associated with Girls?

Diary-keeping as a personal expression of feelings and emotion first became most popular in the 18th century during the Victorian era especially.

This was when women would keep a diary for more personal reasons while men still used theirs mostly for business and accounting.

Some of these diaries would only talk about every daily event as it had happened: what they ate, wore, who they talked to, the weather, etc. Other diaries would include the author’s feelings, personal thoughts, or traumas.

Especially for those women who were married incredibly young, suffered abuse from men or their families, or found themselves trapped in luxurious lives without the ability to choose what to wear or where to go, diaries were an important way for them to feel independent and to have a choice in what they said.

These diaries were, of course, never meant to be published, as most diaries were of that time period.

In essence, the diary is seen as a woman’s source of power – her ability to mark the world as she sees it without being corrected or judged by other people on her assertions.

What Do Guys Typically Write About in a Diary?

Men can write whatever they want in a diary, but the topics may vary depending on their chosen reason for keeping one.

As we mentioned before, a man might keep a diary for practical reasons (such as jotting notes, findings, ideas, inventions, etc.) or personal reasons involving writing down personal feelings, emotions, traumas, or everyday life experiences.

Most men will use their journals to get something done. It makes them feel practical and efficient, without feeling like they are just “writing down their feelings.”

However, there are men out there who love to write about their feelings, daily experiences or get things out of their heads and put them on paper.

Why Do more Girls than Guys Keep Diaries?

It is considered more “socially acceptable” for a woman to keep a diary, and they are even encouraged to by most media.

Any 80s-90s movie female protagonist will have probably been seen keeping a diary or a journal, writing down notes, penning hearts and stars in the margins, and hiding their diaries from their little siblings.

It is considered “normal,” expected even. Parents will buy their daughters journals and sparkly gel pens to write with for Christmas or birthdays, while boys won’t receive that same kind of treatment.

This leads to women thinking that diaries are not only “for them” but also should be part of their daily or weekly routine. There are also a lot of industries out there that cater to creating colorful journals and calendars for women.

Women are also usually the “schedulers” of the house, carting children and husbands around to their various appointments and making sure that everything is on track. This can be stressful for a single person to coordinate while still having a full-time job, so journaling, keeping a diary, or having a colorful schedule planner is crucial for the busy mother.

Regardless of how women get their hands on a journal, they are more likely to have one due to necessity or social convention.

Why is Journaling So Popular Today?

Bullet-journaling, journaling, or diary-keeping is very popular today for many reasons.

There are entire Instagram and artist social media accounts that thrive on creating and posting pictures of their daily journals, schedules, routines, or creations. These artists are considered “bullet-journalists” and can even make a lot of money selling templates, journal designs, or handwritten fonts.

Journaling has also become a source of therapy for trauma victims or people undergoing any counseling. Therapists will recommend that patients write their experiences to help them come to terms with them.

Other reasons that men journal might be that men enjoy journaling, buying fancy pens and markers to write with, and having something on-hand to jot stuff down. There doesn’t have to be a clear-cut “why” for someone to like doing something.

There’s nothing wrong with enjoying expressing yourself or working out problems on paper!

The History of the Diary, the Original Blog