Focusing too much on gender roles tends to put people in a box. Men have emotions just like women, and while they may not express their emotions as openly, they feel things, especially in tough times.

Going through a breakup can be a traumatic experience. So, it is normal to expect a guy to cry. Men can show a lot of emotion after a devastating event like a breakup.

If you want to learn more about the emotional process of man when it comes to experiences like a breakup – you’ve come to the right place! 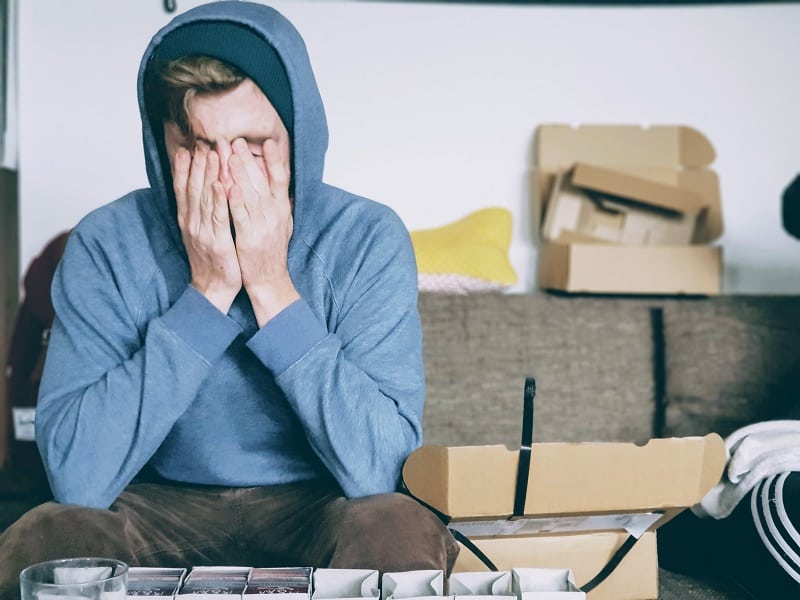 What Is A Typical Reaction For A Guy After A Breakup?

Men are often viewed as the “stronger” person in a relationship, but that doesn’t mean they don’t undergo the same emotional process as a girl.

Depending on who began the breakup, a guy’s first reaction can be hurt and anger. One of the most emotional breakups comes from when one person in the relationship didn’t see the breakup coming.

This is where anger and hurt come in. Not knowing what caused the other person to throw in the towel so quickly without a discussion elicits feelings of hurt, jealousy, and confusion. No matter what type of emotion the guy is feeling, the number one thing is sadness.

Everyone cries when they are sad. It can take a lot of sadness to produce tears, but everyone can be sad and cry, especially over the ending of something as powerful as a relationship.

A typical reaction for a guy after a breakup is often to play it off. After all, a man can want to save face and appear unbothered. Yet, underneath their formidable exterior is the truth to their emotion.

Men process their emotions slower than women. So, while he may be playing off the breakup at first, once he’s been able to process what happens, he will have a more “typical” reaction than you would expect from a woman.

How Long Does It Take For A Guy To Realize His Loss?

The abrupt ending of most relationships feels like a huge loss in your life. You are not only losing a friend, but you’re also losing your partner.

While there are plenty of reasons to move on quickly and feel like that relationship was a mistake, most times, people have a moment of regret when it comes to a breakup.

Women quickly pick apart every aspect of a failed relationship and feel that loss instantly.

Do Men Do This Too?

Since guys have a slower processing time, on average, it takes a man up to 8 weeks to realize what he has lost. They haven’t yet fully processed what went wrong in the relationship. So, they can walk around thinking everything is fine until it hits them out of the blue.

Sometimes, very soon after a break, a guy will go through the typical stages of grief, starting with denial. They can convince themselves that the breakup was a good thing, but once they start putting themselves out there, little things and memories about their previous relationship will pop up.

Can You Speed Up The Process?

Even though guys are slow to process, they certainly are not dumb, and they can easily see through traps, especially on social media. So, if your goal is to win your ex back eventually, you should back off. Avoid posting pictures or trying to make him jealous.

It is more important to let him feel what he is feeling and go through the motions of grief. Ultimately, if he wants to get back together with you, you want it to be because he came to that decision independently.

Using manipulation tactics to win him back is a sure-fire way to ensure that your new relationship won’t last. After all, you already broke up once.

Do your best to make sure the second time around sticks!

How Long Does It Take A Guy To Move On?

Sometimes we don’t have any interest in getting back together with a guy, but we still want them to be happy and move on. How long does it take for a guy to move after ending a relationship?

It takes a guy about a month to resolve his feelings from a breakup. However, this doesn’t mean that they are ready to jump back into a new relationship after the month is up.

This is just the amount of time it takes a guy to process all of the emotions that come with a breakup, leaving them in a better mental state.

It has been said that it takes a woman half the length of the overall relationship to be ready to let go. For example, if you were in a relationship for 6 months, you may be emotionally ready to move in around 3 months.

This isn’t a “law” or fact, but it is a good marker for women who take time to process their emotions.

Is The Timeframe Shorter for a Man?

One important thing to note is that men are known to hold onto grudges longer than women. So, why are they so ready to move on after a relationship if they still hold onto feelings of anger?

It all comes back to what is important to a guy and how they process emotion. Men can meet a new partner even though they haven’t fully let go of what happened with their ex in the past. Women tend to think much further in the future.

Since a new relationship can struggle when one partner isn’t over their ex, women often won’t jump back into anything new until those feelings are completely resolved.

Perhaps a guy can more easily compartmentalize those feelings of anger and jealousy?

Women tend to focus much more on self-care and better themselves before moving on, while men want to rip the bandaid off and jump in with both feet.

Why Did He Cry When He Was The One Breaking Up?

If your guy was the one who initiated the breakup, you might be confused to see that he gets emotional. Which begs the question, why do men cry over a breakup that was their idea?

The answer is simple – it is because they are only human. A breakup happens for so many different reasons.

You can break up from a breach of trust, loss of feeling, societal pressures, or even just timing. One thing that doesn’t always go away during a breakup is love and caring.

Breaking up with you doesn’t mean he doesn’t still care for or love you. Sometimes a breakup is needed to let the other person go. This can be an incredibly emotional time, even for a guy.

Another reason he may cry during a breakup that he started is fear. Change is one of the hardest things for people to adapt to. Having someone who is no longer in your life after such a large part of it is enough to make anyone nervous and scared about the future.

Crying and getting emotional over this type of large change is only natural, even for a guy! Take into stock how you feel. There is no reason why he can’t feel the same thing, even if it was his choice.

Above all things, the main reason a guy cries when he breaks up with you is that he has made an emotional connection with you. It doesn’t matter if there was deep love or not. Any commitment is going to have an emotional attachment.

After all, you were the one he chose to be with, so there has to be a reason for it!

Breakups feel so final, almost like a death. So, having a guy mourn the end of a relationship, even if he was the one who ended it, should be seen as endearing. He cared enough for you and the connection you had to feel like he has to mourn the end.

As women, we tend to see men differently from our female friends.

Men are supposed to be strong, bold, and naturally headstrong beings. However, when we only view guys from that perspective, we automatically put them in an emotional box.

It is important to remember that, like women, men also have different multitudes, especially when it comes to emotion. Women hate being put in strict gender roles where we are portrayed as overemotional and nurturing. Maybe guys also feel the same type of pressure.

I tend to look at emotion as a good thing. No matter how intense or out of the box it may seem, it is a way to express their feelings.

Something is surprising yet amazing about how men showcase emotion. Especially when they cry after a breakup, it humanizes them and helps take them off that pedestal we may have been putting them on.

So, perhaps a man cries after a breakup because they are sad. A guy crying in front of you should show you that they feel comfortable enough to show that other side of them. So, no matter the emotional response, take it with care.

After all, they trusted you enough to share their feelings.

How Long After A Breakup Does A Guy Start To Miss You?

How Long Does It Take For A Guy To Miss You After A Breakup?

How Long Does It Take To Get Over A Breakup for Guys?

What does it mean when a man cries for a woman he’s breaking up with?