There are many factors that go into manufacturing and producing products on a wide scale as IKEA does. You have to consider the cost of production and the environmental impact that large-scale mass-producing makes.

However, in the case of IKEA, they have done something really smart to keep the cost to the consumer low.

IKEA uses both outsourcing and in-house development to manufacture its own products. They do this by using other countries to develop their products depending on where the lowest production cost is. Then, customers build those final products at home. 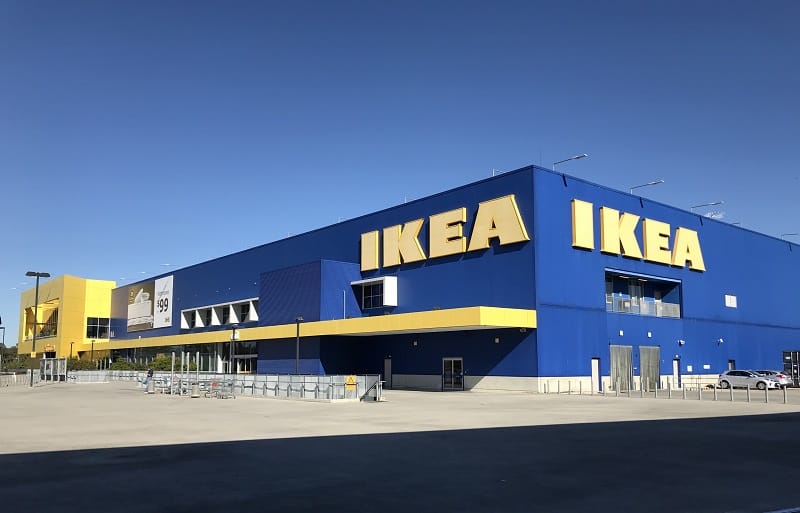 Does IKEA Make Its Own Furniture?

IKEA is the largest retail seller of furniture in the entire world.

Not only do they have the largest warehouses, but they also feature the largest amount of home furnishings for sale.  So, it may surprise you to learn that IKEA does not make their furniture in-house.

However, they do design and are responsible for the initial concept of their products.

If you’ve ever been to IKEA, you can see posters featuring all of the designers they work with and how they could develop the concept of their designs.

All of the products at IKEA are designed in Sweden, where most of their designers live and work.  However, the actual manufacturing of their products happens all over the world.

IKEA has over 1,300 different factories worldwide that create the pieces eventually assembled into furniture.

While most of the actual manufacturing takes place in China, you can find these factories all over Europe, including Poland and Romania.

Does IKEA Own The Factories That Produce Their Products?

IKEA owns and contracts other factories to make their products like manufacturing products.

The main factories are five giant warehouses located across different European countries.  However, the bulk of their production comes out of a contracted factory in China.

IKEA does this to keep manufacturing costs low so that the final price-point to consumers can be lower, but the cost of labor is still very high.

Once a product is initially conceived and designed in Sweden, it is sent to one of their factories for development.  However, many other strings are being pulled to know which products are being developed.

China currently has the lowest cost of production, which is why over 50% of their products are produced there.  The IKEA-owned factories also are consistently turning out the products that fill their shelves.  Cost of production is the name of the game for this furniture giant.

Most recently, IKEA had to close its only factory located in the US due to high production costs.

How Many Suppliers Does IKEA Have?

Along with manufacturing companies, like most other retail chains, IKEA works with various suppliers to stock their stores.

Exactly how many suppliers do a large furniture chain like IKEA need?  IKEA currently works with nearly 2000 suppliers capping out at over 1,800.

These suppliers are spread out of 50 countries and work with buyers.

Why use both Designers and Buyers?

This is because IKEA prides itself on offering a very large range of products ranging in price and style.

More basic items come directly from suppliers to skip the design and conception stage.  However, it isn’t as easy as picking out items from a catalog.  IKEA works with their world-class buyers to check the quality of the products and negotiate the price.

This is an important step because the cheaper they can get products wholesale, the lower the final cost to suppliers.  IKEA is classified as a “high volume” retailer.

This means that they have to keep their shelves stocked with products to keep up with demand, so using both manufacturers and supplies ensures that new products will consistently make a turnaround.

How Much Waste Does IKEA Produce?

Since IKEA is the largest furniture retailer globally, it comes as no surprise that they also use the most amount wood in the world.

IKEA is currently working to counteract its impact on the world’s forests by sourcing directly from forests they’ve bought and constructed to reduce the amount of waste.

Wood isn’t the only material that IKEA uses.  Many of their products are constructed using plastics.  So, how much waste does IKEA produce?

After the waste was redistributed, only around 16% ended up in landfills.

While that percentage may seem low, you have to remember that there was such a high volume of waste that even 16% is still a lot.  No one says IKEA is perfect for its overall impact on the environment.

IKEA has recently set an initiative to be completely waste-free by 2030.

How Is The IKEA Manufacturing Process?

The process of manufacturing products for IKEA starts in Sweden.

Here a team of designers and developers come up with new ideas for production lines that will be featured.  Much like fashion, furniture retailers also go through a seasonal process, which means that IKEA tries to roll out new products that have been in development each quarter.

The development process will include price points, sustainability, functionality, and overall design quality.  Once a concept hits these four points, they are ready for manufacturing.

IKEA then will work with one of its manufacturing companies to plan out the development process.  This takes the longest because all of the pieces need to fall into place for it to be a successful development.

Ever notice that some of IKEA’s newer products resemble older ones?  This is no accident!

IKEA has been known to tweak older designers to feel more modern.  This helps to make the manufacturing process easier!  Once everything is in place, the factory will create the production before shipping them to the thousands of IKEA locations worldwide.

However, the final step of construction is completed in the hands of the consumers – and this is done on purpose!  But, we will learn more about that later in the article!

How Are The Working Conditions In IKEA’s Factories?

When talking about how a corporation leaves its mark on the world, one thing is often forgotten about.

This is the human experience and condition.  While we are programmed to think about environmental impacts, we often turn a blind eye to the impact on human life.  This is especially evident in the manufacturing companies that giants like IKEA contract.

So, how are the working conditions in both the factories that IKEA owns and the ones they contract to work for them?

Almost a decade ago, IKEA came under fire for not paying their workers enough in their European factories.  This includes the ones in Romania and Poland as well.

Workers claim that they were being forced to work long hours for insufficient pay.  This is a common theme throughout the world as most countries are now starting to demand workers get paid a liveable wage, which led the workers in Poland to form two separate workers’ unions.

This came as a surprise since IKEA notoriously pays their factor workers 20% over the average.  However, with a sharp increase in the cost of living, it still wasn’t enough.

Luckily, IKEA has worked well with workers’ unions to develop a fair solution.  One of the best things about IKEA as a corporation is that they don’t tend to shy away from controversy.  They face it head-on and work with others to develop creative solutions that work for everyone.

Whether it is the environmental impact or fair treatment of their employees, IKEA constantly sets the curve for positive change.

Does IKEA Produce In An Environmentally Positive Way?

We have already briefly talked about how IKEA is the number one corporation when it comes to lumber and its effect on the environment, but what about the other aspects of manufacturing?

IKEA has worked to combat the impact of their lumber use, but what else are they doing to reduce their impact?  It all starts with the materials.  This is why IKEA’s suppliers and buyers are a very important part of the manufacturing process.  One of the four criteria any design must meet before being made is that it has to be sustainable.

Everything going into the product down the cotton stuffing must be sustainably sourced.

This included the power used in their factories as well as their warehouses.

Using renewable energy means that IKEA no longer depends on non-sustainable energy like gas which has harmful effects.  They do this by using windmills and solar energy to power their buildings and manufacturing.

Where Does IKEA Make Their Furniture?

IKEA uses manufacturing companies worldwide to make the furniture that you see in showrooms.

However, IKEA considers the consumer the most important part of the manufacturing process. This is because you are only being sold the parts, not the finished product.

If you were to buy the product completely put together, it would be much more expensive, knocking it out of the average person’s price range.  Instead, customers buy their furniture in pieces and put it together themselves.

Sometimes it can be difficult to make the furniture yourself, but the instruction manuals provided by the company are generally helpful and easy to understand. Also, if you are ever missing a piece or break or get lost, IKEA will replace it many times at no extra cost.!

So, while it may seem like you’re doing most of the heavy lifting, it does you a great service!

While IKEA doesn’t always manufacture their products, they have remarkably managed to stay very true to their brand.

It is about the consumer’s experience.  Most IKEA shoppers appreciate the extra detail about manufacturing sustainable and affordable products.

Even though doing most of the work yourself may seem daunting, the payoff is more than worth the stress.

While IKEA isn’t perfect for waste and its impact on the environment, they are trying, and that’s the most important thing.

So, next time you are wandering through the massive showrooms looking for that one coffee table to complete your room, think about how far it has traveled to get to you.  It went through a series of designers, developers, supplies, and ultimately manufacturing factories to get to you.

Perhaps the most impressive thing about IKEA’s manufacturing process is that they have maintained strong relationships with everyone involved making them a great corporation to support.

Where Is IKEA Furniture Manufactured?