Most kettles fall within the $20-$50 range, depending on whether or not they are electric or standard stovetop kettles.

If you buy a standard stovetop kettle from Target or Wal-Mart, you’ll probably only pay about $15-$20, whereas most electric kettles start at about $30.

In this article, we talk about why electric kettles are generally more expensive than stovetop:

Why Stovetop Kettles are Cheaper than Electric: 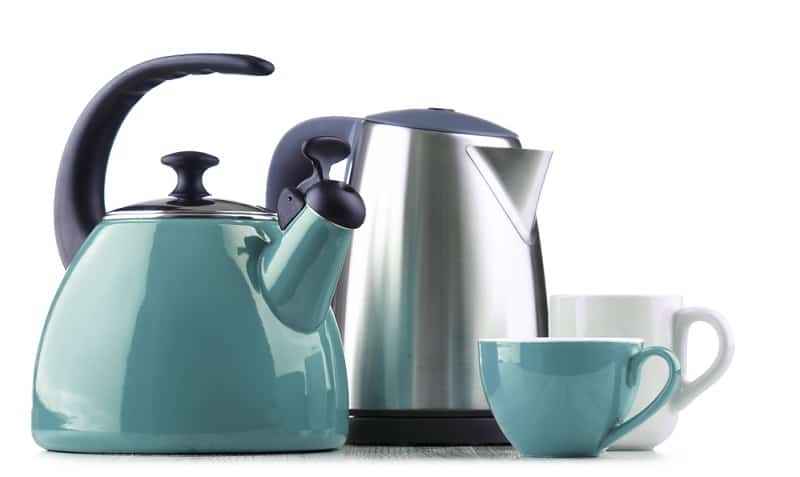 Electric kettles are more expensive than your standard stovetop kettle, but they have many advantages that make them worth the extra cost. For example, you can boil water much more quickly and without effort on your part with an electric kettle.

In addition, electric kettles also come with safety features. Some models automatically shut off when the water reaches a certain temperature or when the lid is opened during operation.

This prevents accidents from happening due to carelessness on behalf of users who don’t know how to use these appliances safely without supervision from others nearby.

So while standard kettles cost less because they are simply empty kettles without wires, they require a stove or fire to heat the water inside. That means using gas or electricity to heat your stovetop and then your kettle.

Plus, with a standard kettle, you’ll need to keep an eye on the stove and kettle without walking away. Electric kettles are self-operating and will turn off when the water is boiled and hot enough for tea or coffee.

Is It Cheaper to Heat Water in a Kettle or on the Stove?

If you’re only heating one or two cups of water, using an electric kettle might be more efficient because they heat the water faster than gas stoves.

However, using a gas stove will probably be cheaper and more energy-efficient if you’re heating a large pot of water.

The amount of electricity used by electric kettles also depends on how much power they draw from your home’s electrical grid. The power rating for each model will vary based on its wattage and design features like automatic shutoff features.

For example, according to canstarblue.com, “The DeLonghi 1.7L Icona Capitals Kettle uses up to 3000W of power and is said to brew up to six cups of coffee, tea or hot chocolate.” That means that this electric kettle uses a lot of energy when it is brewing!

Gas stoves also have different power ratings that depend on their size and efficiency ratings. A smaller stovetop model will generally use less gas than a larger one because it has a larger surface area that needs heating at once time.

Is It Cheaper to Use a Microwave or Kettle?

If you’re boiling water to use in coffee or tea, then it’s probably cheaper to use a kettle.

A stovetop or electric kettle takes a lot less time to heat up than a microwave, so you’ll be able to get your hot beverage faster and save money on electricity.

A microwave is a great option for cooking food or heating leftovers because it cooks food quickly and efficiently. However, it takes longer to boil water in a microwave.

Also, if you are looking for a way to boil large amounts of water, it might be best to use a pot on the stovetop instead of one of these appliances. A pot will typically use less energy per cup than either appliance would.

Is an Electric Kettle Cheaper Than Gas?

Generally, electric kettles are more energy efficient than using kettles on gas stoves, but they can be more expensive if your energy costs are high.

Gas stoves aren’t too expensive, but they do require tank refills or gas line repairs from time to time. Getting an electric model might be worth it if you use your kettle frequently.

If you’re looking for a new kettle and want to save some money, consider getting one that uses less energy than others on the market. You can also look for models with an auto-off function, so you don’t waste energy when you’re not using them.

Is It Cheaper to Boil a Kettle or a Pan of Water?

The amount of water you need for tea, coffee, or cooking will significantly affect how much energy you use to boil it.

The greater the volume of water you boil, the greater the energy cost. There are other factors at play here, too, which might make boiling a kettle more or less efficient than boiling a pot of water.

The biggest factor is how much heat escapes from your stovetop while waiting for the water to boil. Using a kettle to boil water instead of a pan on an electric stovetop is more efficient than boiling water in a pan because of the lower heat transfer rate.

Consider how much time it takes for your water to come to a full boil and how long it takes to cool down after being heated. In some cases, it might be more efficient to boil large volumes of water at once rather than smaller amounts over time.

It saves energy by not heating that same amount of water repeatedly each time you want some hot tea!

How Much Does It Cost to Boil a Kettle for One Cup?

Boiling water for one cup is a fairly inexpensive process.

The average price of boiling water in an electric kettle in the United States is $0.01 of the national average.

What Is the Cheapest Way to Boil Water?

There are a few options if you’re looking for the cheapest way to boil water.

The most obvious is a kettle. While a stovetop kettle will get the job done faster, an electric kettle will help you save money on your electricity bill.

Which Kettle Uses the Least Electricity?

Choosing the right kettle type is important to save energy and money. A good electric kettle will use less electricity than a stovetop kettle.

Electric kettles can be programmed to keep water hot for as long as you need it, saving energy by only heating water when you need it. They also have larger capacities than stovetop kettles, so they take up less space on your countertop.

Stovetop kettles allow you to boil water quickly, but they require more energy since they need to be heated on a stovetop.

The top 10 fastest-boiling kettles for your kitchen