Before we can look at why someone might be guarded in a romantic relationship, we’ve got to first look at what it means to be guarded.

Men who are guarded are emotionally distant, have trouble expressing their emotions, and are not overly affectionate. That doesn’t mean they don’t care, though. They likely care very deeply.

So, how do you know if someone you love is guarded with their emotions?

Here’s How to Tell if He is Guarded:

Men who protect themselves from breakups by not committing or going all-in on a relationship are “guarded.” They will try to prevent heartbreak by walling themselves up emotionally. They may also downplay your relationship with others or avoid deep topics, but behavior can hurt their partner. 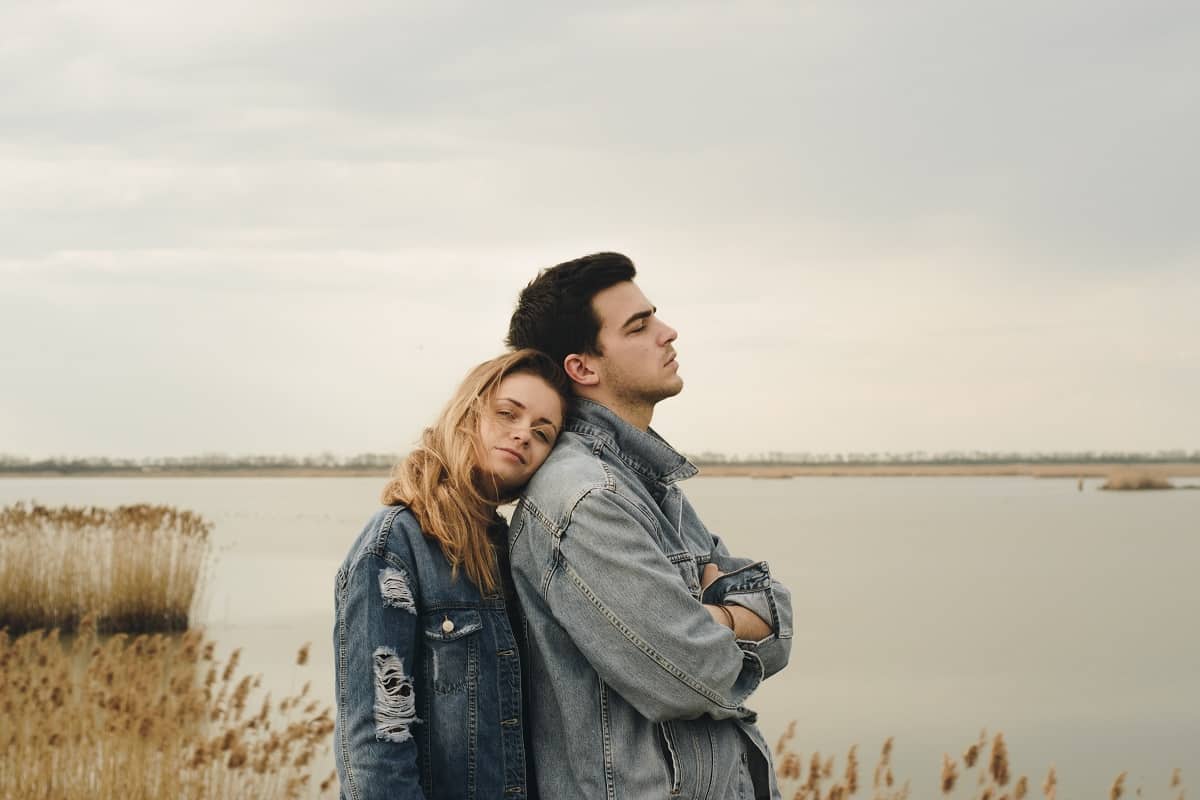 1. He Has a Wall Up Around Certain Topics

Guarding is an attempt at self-preservation.

If you find that he leaves the conversation or changes the topic whenever you try to talk about something deep, you can tell he’s being guarded. Depending on his previous experiences, it might be too hard to talk about whatever the topic is.

He may also be uncomfortable.

It is best to ask him if he would prefer you didn’t talk about “xyz,” and then when you’re comfortable with each other, you might be able to ask him why he feels that way.

None of us like to be criticized or confronted, but since a guarded guy is trying to protect himself emotionally, he may jump to acting defensive.

If he’s blaming you or accusing you of the same thing—“Well, you never open up to me, either!”—those behaviors stem from an attempt to shift focus away from himself.

He won’t always be a shoulder for you to cry on. If things get heavy and he is nowhere to be found, he may be a guarded person.

Sometimes we all need a person to be there for us or a place to grieve together.

If your guy doesn’t call back after you leave him a crying voicemail or skips a friend’s funeral, that’s a sign that he’s just not equipped with the tools to face those emotional situations.

Instead, he avoids them to protect himself from hurting.

Being “Mr. Fix-it” means trying to fix your problem without actually helping to sympathize with you first.

Say you have a family situation that’s causing you a lot of pain. A guarded response from your partner might be something like, “Well, that’s just how your sister is. Stop letting it bother you, and you’ll feel better.”

Instead of acknowledging your feelings, he tells you a somewhat unrealistic way to “deal” with the problem.

Offering oversimplified and unrealistic solutions might make him feel helpful, but they don’t do much for you.

If he listens but rushes you through your feelings, this is another sign that he’s not emotionally available.

Being guarded can come from a lack of trust, so many men won’t trust you until you earn it.

For example, he might be surprised when you follow through on promises. Say you showed up to a work function where he’s being honored, or leave him be on a night where you know he’s out with his friends.

Whatever happened in his past caused the guardedness he has today, and he’ll likely expect every romantic partner to act that way. His surprise and gratefulness toward you for following through and being there could have something to do with a rocky past relationship.

Furthermore, if he appreciates what you do without saying “thank you,” but instead does something nice for you around the house or for your family, he may be thanking you without words.

6. His Life is Super Segmented

Integrating the different parts of his life isn’t high on his priority list. Even if you’ve been dating a while, he may not rush to introduce you to his friends or family.

By keeping you apart from other parts of his life, he’ll be able to minimize the “damage” that he thinks is coming. If you meet important people in his life, he may downplay your relationship.

When things go wrong (like he’s expecting them to), those friends and family members won’t know how hurt he is. This guarded behavior is to protect himself in case of a breakup down the road, but it can harm you, too.

If you want more, let him know that you aren’t going anywhere and want to be involved.

Speaking of family, if you meet his folks, you may find out why he’s like this.

It’s undeniable that we’re all products of our environments (that whole nature vs. nurture thing).

If his family isn’t affectionate or doesn’t say, “I love you,” then they didn’t show him those sorts of behaviors as a child. To be clear, that doesn’t mean his family doesn’t love him.

They show it differently than perhaps what you’re used to.

In many cultures, men are deterred from showing emotions at all, whether they’re positive or negative.

Guarded people struggle with vulnerability, and when two people admit that they’re exclusively dating or engaged to be married, that adds pressure.

Loving someone enough to marry them means a higher pain level if a breakup happens.

Keeping it casual for as long as possible can help him pretend that he wouldn’t be devastated if you weren’t together—but not committing can also bring about the pain that he fears. It’s a self-fulfilling prophecy.

If you’re in a relationship with a guarded guy, he’s more likely to pay attention to the little things.

For example, he’ll know the things you like and get them for you, or he’ll read a book because you said you loved it. If you do the same, these actions mean a lot more to him.

This means that he isn’t necessarily into physical affection. Instead, those meaningful acts will be more important to him.

10. His Relationship History is a Playlist on Repeat

Any trauma, hurt, or embarrassment that they felt from their previous partner might creep into their new relationships. That hurt can spoil their new experiences because they are too afraid to love or be comfortable again.

If that happens, they will be guarded, distant and even cause their current partner to pull away or leave them.

They will then turn that into more heartbreak and trauma without realizing that the problem was being too guarded in the first place!

11. In His Mind, There’s No Silver Lining

He’s unwilling or unable to see that sometimes good things come out of bad situations.

Most of us have been through things in our life that are rough at the time. When we look back on them, we can see that we got stronger or wiser because of them.

Humans do grow through times of adversity. Someone guarded might see a past relationship or friend breakup as only bad without any good. They can’t admit that they ended up in a better place overall because of that situation.

That level of introspection requires a person to examine their own hurt feelings, and guarded people struggle with that.

A guarded guy might think he is all he needs because everyone else has let him down.

Humans are pack animals at the end of the day, and we all need people to count on. A response to being hurt or left alone may lead to extra independence and a sense of self-reliance.

This can really hurt his current partner’s feelings, especially if they have never done anything to make him feel that way. Instead, he uses past hurt and trauma to fuel his current relationship.

A woman devoted to an independent guy might begin to feel very lonely. She may even leave him to find emotional support and affection elsewhere.

It can be incredibly frustrating if you are falling for a guarded man.

However, a guarded heart isn’t a death sentence for a relationship. You can work on trust and vulnerability issues if he’s willing to identify them – either on his own or with the help of a professional.

Finding ways to communicate, build trust, and argue effectively can help people who are guarded open up to those they love.