Many confident men are okay with making eye contact with a woman when speaking to her.

In fact, many men believe that the eyes are the most attractive part of a woman. Clear, sparkling, expressive eyes are the way to a man’s heart in a lot of cases.

Usually, it doesn’t even matter what color or shape your eyes are. All that matters is that your eyes express who you are inside.

Here’s How Much Eyes Mean to Guys:

Some men will find the eyes the most attractive part of a woman. Eyes are expressive and show a person’s emotional state, which men will watch for when approaching a woman. Eye color and shape can also attract different men, but all standards of beauty and attractiveness are subjective. 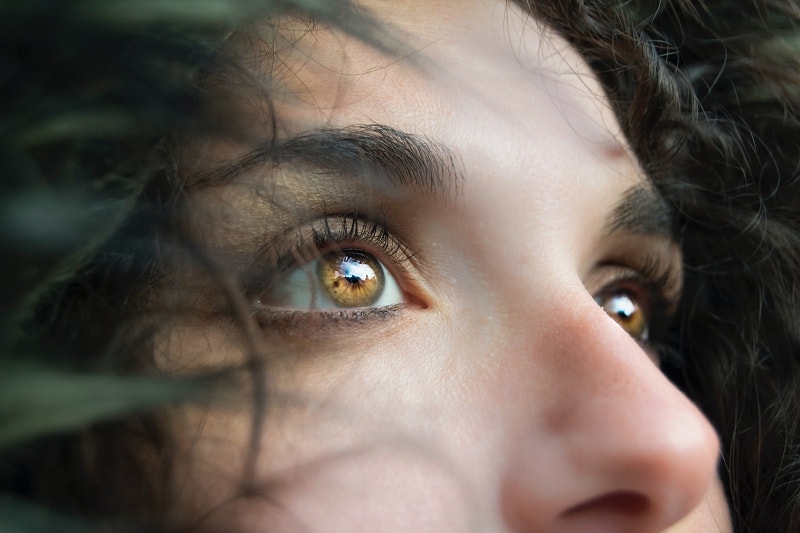 How Much Does a Girl’s Eye Color mean to Guys?

Eye color preferences are so subjective that it’s impossible to know whether or not you have an attractive eye color.

Many people think that rare eye colors such as blue and green are the most attractive eye colors. This is not always the case.

There are many people in the world who love common eye colors such as light and dark browns. The myth that the only beautiful eye colors are blue and green is not true.

Being attracted to someone is usually is more about the person themselves than it is about the color of her eyes.

Depending on the guy, the specific eye color may matter to him. They may have a “type” that they look for when they go out to meet potential partners.

This is a common occurrence with a lot of people. Finding someone who meets your “criteria” when looking for a partner is how most people choose who to talk to.

However, men and women are far more likely to ignore physical appearance if the person that they meet is very interesting or excites them. That’s why they say that people with a good sense of humor and are kind are more likely to rely on their personality rather than their looks.

If the guy you are talking to prefers an eye color that is different from yours, it may make him look elsewhere. However, if you have an emotional connection, he may stick around regardless of your eye color.

Most people like it when their potential dating partner looks healthy and happy.

Having clear, bright, and healthy eyes is a huge attraction to most potential partners. Regardless of their color, having a healthy look about you is the best way to get someone’s attention.

Furthermore, there are men out there who like eye makeup or women who shape their eyebrows. Along with keeping clean, many women like to do up their makeup and create cool, eye-catching patterns.

However, doing makeup or your eyebrows is not a requirement to finding a romantic partner. Not all men or other women like makeup on a woman and will not care if you wear it or not.

Some men find the shape of a woman’s eye to be attractive. They could be attracted to eyes reminiscent of a geographical location, such as preferring a more European-shaped eye.

However, if a guy prefers certain eye shapes to others, he may be finding an attraction to you based on race. This could be a red flag or not, depending on the guy, so keep an eye out for those signs.

How Do you Make Your Eyes More Attractive?

Making your eyes more attractive can almost always come down to having a good skincare routine and staying healthy.

Women who have clear, bright, clean eyes are more attractive to potential romantic partners regardless of their color or shape. This is an evolutionary trait that people have, where they want to date or be with someone who takes care of their body and health.

This usually means not putting dangerous things into your body, such as smoke, drugs, or alcohol, which can give you bloodshot eyes or make you look tired. Even an unhealthy diet can make your eyes have bags beneath them or make you look puffy and unwell.

Moisturizing your face and taking care of your skin is an amazing way to not only keep your skin looking younger but also to make you look healthy and bright.

Other ways to make your eyes more attractive could be putting on makeup, wearing colored contacts, or shaping your brows. This happens when a person wants to look a specific way, like if they wish they had green or brown eyes instead of their normal color.

It also happens when women like to turn makeup into an art, shaping their faces in fun and interesting ways with bright, neon colors or small portraits on their eyelids.

Some women also put on a lot of makeup because they think it will make them more attractive to men or other women, depending on their dating preference. While it is true that many men prefer women to wear makeup because it makes them look “dressed up” or “finished” when going out, not all men want a woman to wear makeup.

The most important thing to remember when making yourself feel more attractive is to do it for yourself and not another person. If you like makeup, wear it! If you don’t like makeup and just want to moisturize your face, do that instead.

You don’t have to change for anyone but yourself.

Are Eyes Always the Most Attractive Feature in a Girl?

To some men, eyes can be the most attractive part of a woman’s face. Maybe even her whole person.

They say that the “eyes are the gateways to the soul,” and a lot of that comes from the expressions that you make. When you laugh, cry, get excited, or are angry, your eyes will show the most expression on your body.

As humans, we are evolutionarily conditioned to read a person’s facial expression and make quick decisions based on how they are feeling. This will naturally draw men to your eyes, as they will be watching how you react to their interest in you.

Not only that, but bright and emotional women can be very attractive to other people. Depending on their reactions or expressions, it could mean that they are fun, outgoing, exciting, or compassionate.

The eyes will always be the part of you that speaks the most to another person, even if you don’t know it. Men do look out for that kind of thing, so they may find that your eyes are the most attractive piece of you after all.

Long eyelashes are such a controversy when it comes to men and women.

Women who turn their makeup into art will usually add fake lashes to their face, elongating their eyelashes and applying mascara to emphasize them.

The reasoning behind this may stem from the idea that bigger eyes are more attractive than smaller ones. While that assumption is purely subjective, many women will try to enlarge their eyes as much as possible.

However, men have been known to disagree with this assessment, from claiming that women are “hiding their real face” to saying that it is absurd that women would want to elongate their lashes at all.

Depending on your guy, lashes may or may not matter to him, so make sure you do your makeup for yourself and not him.

Stating whether or not something on your body is challenging because women generally emulate what they are told is “attractive.” Particularly what is attractive to men.

Makeup companies in a particular state that long lashes and eyeshadow are not only important but will create entire million-dollar commercials surrounding mascaras and lash-blasting products. These commercials and companies train women to think they need to have makeup and long lashes to be “finished” or “put together” for their day.

When men come along afterward saying that women are dumb or are “lying” to them about their appearance by wearing too much makeup, it is very distressing for women. Not only does it make them self-conscious, but also confused!

They are told to wear makeup, so they do. Then men will post online how “smart women don’t wear that much makeup,” or “take her swimming on the first date, so you know what she really looks like.”

Different parties will always claim that they know what makes a woman attractive. However, the only person who should be deciding how attractive you are is yourself.

If you like makeup, if you don’t, it doesn’t matter. Do what makes you happy!

The most attractive thing that a woman can be is happy and confident. It glows out of us and especially shows in our eyes when we are happy with ourselves.

What’s the Most Attractive Eyelash Length?

Who’s Behind the Makeup? The Effects of Varying Levels of Cosmetics Application…