With many different gemstones and crystals, there come different accounts and stories throughout history.

Often, gemstones were considered to hold magical properties, and even in some spiritual practices today, gemstones are used in at-home healing rituals.

Well, many different accounts of diamonds – especially the famous Hope Diamond – have been considered to bring about either great luck or terrible misfortune, even curses. Diamonds themselves have no bad or good luck but are, in fact, just pressurized carbon and are a major fashion trend among elites.

In this article, we will explore the superstitions around diamonds and their historical impact. 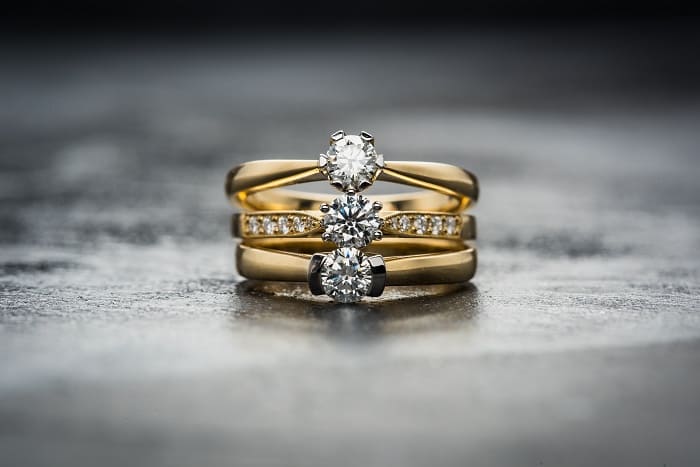 Diamonds have been known to be very unlucky, yet incredibly valuable over the several centuries that humans have used them to adorn themselves with.

One of the most famous unlucky stories is that of the Hope Diamond, a rare, 45-carat blue diamond that was owned by French royalty, socialites, sultans, and collectors.

Because of its supposed curse, and also because of the changing political tides of war and government, the diamond had been passed around for centuries before finally being donated to the Smithsonian Museum in Washington, D.C.

The reasoning for the “curse” that has been accused of being laid on the Hope Diamond stems from the misfortunes that have befallen those who wore it. From disease, suicide scorned lovers, and war, many of the owners of the Hope Diamond have been rumored to have suffered.

Since some of these accounts stretch nearly five hundred years into the past and over the vast telling and retellings through different cultures and languages, it is impossible to know if each story is true.

However, the rumored curse remains one of the most interesting things about the diamond, and it lays behind glass in the Smithsonian to this day.

Not all diamonds are considered to be unlucky, though that can be the general rumor about the gemstones.

Diamonds in and of themselves are extremely harmless. No item is more or less lucky than another, and it is generally considered to be a false superstition to attribute luck or bad luck to a gemstone.

However, there are many in the world who believe that luck exists, and possessing something with bad luck can be catastrophic.

Does it Differ Between Countries and Cultures?

In ancient Greece, people believed that diamonds protected against the “evil eye,” which was a famous superstition that if someone gave you a look, they could be “cursing you with the evil eye.” The ramifications of this curse vary depending on which family is telling you about it, but the idea that diamonds can protect you from it is a very popular opinion.

However, there are also those who believe that diamonds bring about natural disasters, can summon the wrath of gods, and can cause the person misfortune should they wear an unlucky diamond.

One of the more famous superstitions is about wearing the engagement ring of a failed marriage, which can cause someone to suffer in their own marriage or future romances. This is a western fear and can stem from American and sometimes European histories.

In ancient India, diamonds were also thought to cure insanity and prevent the wearer from being struck by lightning.

What is the Symbolic Meaning of a Diamond?

Diamonds have so many meanings; it is very difficult to list them all.

From love, wealth, magic, and even fallen stars, diamonds have captured the attention of humans and those who could afford them for a very long time.

Most often and recently, diamonds are used as a symbol of marriage and engagement.

In 1947 an advertising campaign for diamond engagement rings claimed that “a diamond is forever.” This was both to say that your marriage will last forever if you propose with a diamond, and also to state that diamonds are a long-lasting gift, which they are.

Now, diamonds make up for one of the most expensive parts of your wedding. Most wedding rings cost upwards of one thousand dollars, and many spend at least three to four thousand on engagement rings.

What Are the Benefits of Wearing Diamonds?

While several cultures believe that diamonds can possess health benefits and can encourage love and devotion, the diamond itself really is just a piece of pressurized carbon.

However, diamonds can express different things to friends, family, and strangers that you mean.

Mostly, diamonds represent wealth, as they are very expensive, and can give other people around you the impression that you are wealthy or have a partner who gives you expensive gifts.

While this isn’t necessarily a “benefit,” for those who wish to look very wealthy and formal, diamonds can do the trick.

Diamonds can also represent love and devotion through an engagement ring, benefiting the person who is proposing by putting their best foot (and price tag) forward.

Which Gemstones Are Considered Good and Bad Luck?

Some gemstones are considered luckier than others, while other gemstones have completely different meanings entirely.

For example, sapphires are meant to bring calm, wealth, and good health to the wearer, while rose quartz represents passion and love, encouraging crushes and finding “that special someone.”

Here are a few more lucky gemstones and their meanings:

These are only four lucky stones, but honestly, there are hundreds of them that are considered to be lucky in many cultures.

Often there will be different accounts of different stones as well. For example, Tiger’s Eye is also thought to be meant for adventurers or for those who are seeking something, and others believe that Tiger’s Eye can tell you when evil or bad people are nearby.

If you are looking for a lucky gemstone, you shouldn’t have any trouble.

Are Black Diamonds Good for Luck?

Black diamonds have a mystery about them that stems from their opaque look and their rarity.

Superstitions abound with black diamonds, and they are considered to be very, very unlucky.

In ancient Indian culture, where many diamonds originated, black diamonds are thought to bring danger upon the wearer. However, there was reported a very large black diamond, called the “Black Orlov,” which was placed upon the altar of Brahma, used in the eye of the god’s statue.

It is a massive diamond that was rumored to be originally 195 carats. It is speculated that the diamond was stolen from the temple, and therefore brought curses to all those who would come into contact with it, inevitably resulting in suicide.

While these reports cannot be completely verified, it does put a dark mark upon the black diamond’s reputation.

Because of this early recording, not only were black diamonds considered dangerous but also filled with great power, hence their use in the worship of gods.

Are Pear-Shaped Diamonds Back Luck?

Pear-shaped diamonds are also considered to be a teardrop.

Whether those are tears of joy or tears of pain in a marriage, different sources agree that the pear-shape makes it very different in luck and love from a regular diamond.

There are accounts that state that pear-shaped diamonds are for women who are very strong, traditionally romantic, and will have a happy marriage.

Other accounts state that a woman who is not married should never wear a pear-shaped diamond or someone else’s engagement ring before marriage.

It is stated that it will cause great suffering and could prevent the woman or person from finding the partner of their dreams.

Finally, there are some that believe a pear shape can mean raindrops and may cause it to rain on your wedding day, or even to create a gloomy marriage. Others say that rain brings growth, love, and flowers, which makes it great for new couples.

Superstitions come from all over, through different languages, cultures, and histories.

Whether you believe in them or not is entirely up to you, and will most likely not make a difference in the diamond that you want to wear on your wedding day.

Instead, pick something in your price range, and make sure you love how it looks.