What is impressive about jewelry is how organic the materials can be if you are using them correctly and not modifying them with chemicals or specific manufacturing tactics.

It is even more amazing when you think about all the family heirloom jewelry that has survived for several generations!

Families, museums, and displays have been able to preserve and keep even the most ancient pieces in excellent condition, which is great for someone who wants to pass down their heirlooms to future generations.

However, if you are worried that your diamonds and jewelry are going to last forever and possibly pollute the environment, we’ve got an answer for you!

Diamonds do not last forever, but they are not categorized as biodegradable. Diamonds are a form of pressurized carbon, and at the right temperatures and pressure, they can degrade into a different form: graphite. However, natural conditions on the earth’s surface will not break down a diamond.

If you were to subject your engagement ring to highly extreme conditions found in a laboratory, it could decompose or shift into a graphite state. However, this would require extreme temperatures and high amounts of pressure to shift the atoms and chemicals of the diamond to change.

So technically, no, a diamond isn’t forever, but the average diamond in your engagement ring isn’t going to go away anytime soon. 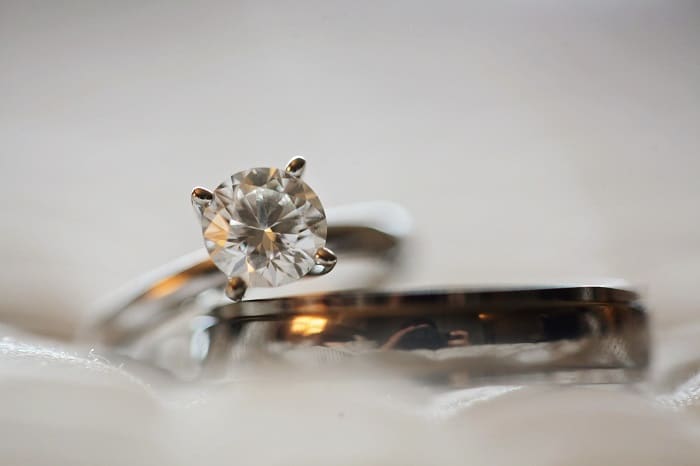 How Long Do Diamonds Typically Last?

A diamond can last millions of years.

This seems like an extreme length of time, but diamonds are very incredible forms of pressurized carbon. Created in the earth’s mantle, diamonds are forced into the state that we see them in now over billions of years of creation through extreme temperatures and pressure.

A diamond isn’t going to just disappear overnight, and some scientists estimate that diamonds kept at room temperature can last billions of years!

If, however, you were to subject your diamond to upwards of 3,000 degrees Fahrenheit, you could probably see your diamond decompose or shift into a graphite form within minutes.

Also, there are still lots of diamonds left in the world.

Because diamonds can last this long, they are considered to be the favorite gemstone of the wealthy, royalty, and those looking to propose marriage to their loved ones.

This also accounts for their incredible price tag.

In the 1940s, diamonds were advertised as an alternative for engagements and wedding bands, which replaced the regular, more colorful gemstones and plain engagement rings that had been in circulation at the time.

Paired with their durability and consumer demand, this makes diamonds incredibly valuable to many different cultures all around the world.

Do Diamonds Decompose Over Time?

Diamonds do not necessarily decompose over time.

As we have stated, if you were to heat up a diamond over several thousand degrees, you may see a shift in its chemical structure. However, diamonds do not naturally decompose.

If you were to bury a diamond in the dirt and wait thousands of hundred years for it to decompose into the earth’s soil, it just wouldn’t happen. It requires a much stronger, hotter, and more pressurized environment or force to cause a diamond to chemically shift.

The idea of decomposing is reserved for the chemical breakdown of an item by decay, which usually is only capable of by organic materials.

This is why polluting substances like plastic, which take tens of thousands of years to decompose, are not considered biodegradable or compostable.

When we think of biodegradable, we think of composting or garbage heaps that break down over time and “go back to the earth.”

Biodegradable really means that living organisms and bacteria can, over time, break down the composition of an item – such as a banana peel – and decompose it into the earth, returning it to its smaller and more primitive states.

Most biodegradable materials are organic and are used in composting and are able to help fertilize gardens or be recycled and repurposed into other materials.

Diamonds do not fit this category because they are incapable of being eaten away at or broken down by living organisms or bacteria. Diamonds are of the most durable substances in the world, and only other diamonds are really capable of cutting into them.

This means that many construction and shaping materials used to cut diamonds are literally made from diamond-tipped drill bits or blades.

So, no, diamonds are definitely not within the definition of “biodegradable,” but they are also not eternal.

How Quickly do Diamonds Turn Into Graphite?

Diamonds take over a billion years to naturally turn back into a different form of carbon, such as graphite, so you will never see it happen in your lifetime.

This is because a diamond underwent very extreme conditions to be created, and its atomic and chemical make up is impossible to break down by organic means.

However, a diamond that is subject to laboratory experiments and several thousand degrees of temperature could turn into graphite within minutes or hours, but that is only mostly accepted in theory as it is difficult to re-create in a testing site.

Furthermore, a family diamond kept at room temperature and well-cared for may not even smudge or shift into a faded version of itself. There are diamonds and heirlooms that were worn by kings and pharaohs centuries ago that are still in peak condition in museums to this day.

Instead, diamonds – in the scope of human life – really do last “forever.”

How Old is the Youngest Diamond?

Natural diamonds are ancient, dating back from one to three and a half billion years. Because of this, new diamonds forming in nature may not be discovered by humans for a very long time.

Instead, humans have turned to create diamonds in laboratories through a high-pressure controlled process.

Because diamonds were formed billions of years ago, the idea of a diamond being “young” is more of a laughable misnomer than anything else.

This is because the formation of a diamond requires a very, very long time to create in the heat and pressure of the earth’s mantle and pressurization of carbon.

It is, therefore, very impossible for a diamond to be young in the human sense of the word, but rather on the grand scheme of the Earth’s history, 900 million years is not very old at all.

Do Some Diamonds Last Forever?

No diamond really lasts forever, but there are diamonds throughout history that have changed hands and seen many centuries of human wars, political changes, development, and revolution.

The Hope Diamond, for example, was first recorded after being bought in India (the location of many significant diamond discoveries throughout history) in 1666 by a French gem merchant. Since then it has changed several hands, being owned by kings, socialites and even earned a few stories of bringing curses to its owners.

This means that in the course of human history, the Hope Diamond is about 354 years old, however chemically, it is recorded to be about 1.1 billion years old.

The Hope Diamond, now on display at the Smithsonian Museum, is still in fantastic condition and has been well cared for over the three and a half hundred years that it has been known to the human race.

So, no, diamonds don’t really last forever, but we can witness them over the course of centuries.

DIAMONDS A TO Z – Natural History

The sparkling rise of the lab-grown diamond – BBC.com