Living a vegan lifestyle is difficult at best.

There is no consumerism in the world today that doesn’t negatively impact someone or other. This means that many vegans struggle to make sure that their food, clothing, and lifestyle leave as little impact on the world around them as possible.

Diamonds are not vegan, but this is a subjective viewpoint. Mostly, this is not regarded as vegan because of the impact that they have on the environment, groups of people, and locations where diamonds are found. Mining, transporting, and carving up diamonds for commercial sale is not vegan. 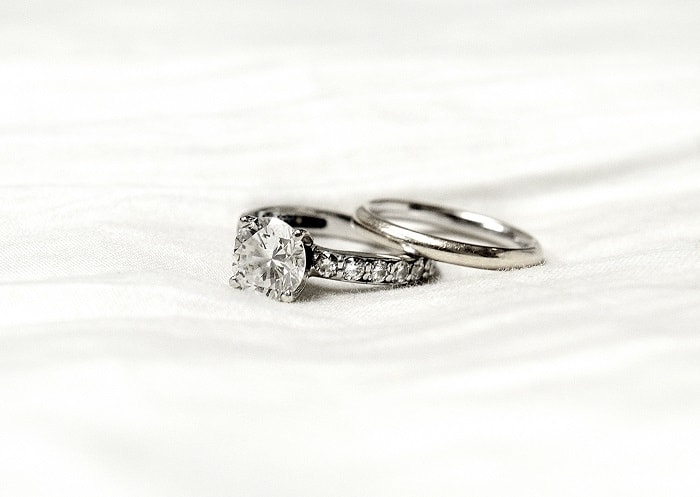 Many vegans in the world may wear diamonds without thinking about the ramifications of wearing them.

They are quite comfortable to wear as diamonds are not heavy.

While diamonds are from the earth and are mostly a naturally occurring substance, the mining and transportation of diamonds that are for sale have such a strong and negative impact on the environment.

The best way to interpret diamonds and veganism is to define veganism in a way that makes sense toward jewelry and clothing:

Being vegan doesn’t always mean that you just don’t eat any meat.

Sometimes being vegan means you try to leave as little impact on the world as possible.

Whether that is buying locally, growing your own food, making your own textiles, or whatever else, being vegan mostly means to cause less harm than we do now.

This negatively impacts with jewelry and clothing because most vegans can’t make those. This means that they will try to buy as cruelty-free as possible.

But most natural non-lab-grown diamonds are not cruelty-free, and therefore they shouldn’t be considered vegan.

Diamonds are mined in many places around the world and have been for thousands of years.

While mining techniques have improved the cultivation of diamonds, their transportation, marketing, and distribution, the act of mining diamonds have had negative impacts on the environment and the communities of those who live near the mines.

Most natural grown diamonds have a dark history of the exploitation of workers, forced labor, child labor, and local civil wars. This is because diamonds are a very valuable commodity, and many mine owners – especially in Africa – have been known to do whatever it took to cultivate those diamonds.

Diamonds have also caused a lot of environmental devastation to land and water. The mining of any substance takes a hard toll on the earth where a mine is located and can trickle down through water supplies to other habitats.

Especially runoff, which can end up being toxic to plants, animals, and even people.

How Do Vegans Generally Feel About Pearls and Jewelry?

As we’ve mentioned, not all vegans subscribe to the same idea of veganism.

There may be some who only consider veganism part of their diet, while others live a completely vegan lifestyle.

Those lifestyle vegans are very careful about where they shop for their jewelry, and most don’t approve of pearls, which are created by an animal and then forcibly removed from that animal.

Meanwhile, there are still groups of people who question whether animals like mollusks and oysters have sentience, pain, or suffering when a pearl is removed. Most vegans would argue that any animal is capable of some kind of sentience and pain, so they generally don’t approve of pearls.

How Do You Know if a Diamond is Ethically Sourced?

There are many who believe that lab-grown diamonds are much more ethically sourced and created than blood diamonds or naturally occurring ones.

This is because a lab-grown diamond is made by scientists and powerful technology, which can create a true diamond under synthetic circumstances.

For more information on how diamonds are formed and lab-grown diamonds, check out our article about the formation of diamonds!

However, even a lab-grown diamond comes with a negative carbon footprint.

Once a lab-grown diamond is formed, very powerful machines and technology are used to make them. This uses up a lot of power and resources.

Then, once that diamond is made, companies who are in demand of diamonds to sell will have those diamonds shipped to them over very long distances. The shipment of these diamonds can greatly add to greenhouse gases and increase carbon emissions.

Then the packaging, cutting, and shaping of diamonds take more time, power, and resources from many different places around the world.

At the end of the day, your diamond will have gone through a lot of changes, transport, and resources before reaching you.

Millennials have been accused of killing many different industries – the diamond industry is one of them.

There are many different reasons why millennials might not buy diamonds, but we’ve listed three here:

It is no secret that millennials in many parts of the world are suffering from bad economies and a lack of employment.

This is largely due to the housing market crash back in 2008, as well as a myriad of other financial crises that have riddled the world since Millenials were born.

Therefore, many who fall into the category of millennials (those born between 1980 and 1994) aren’t usually buying diamonds because it is a major financial choice. Diamonds are much more expensive than most other gemstones, and some Millenials are even choosing wood or metal rings instead of the “traditional” diamond ring.

Sites like Etsy are even trying to outdo the diamond industry by creating minimal jewelry designs that millennials can afford.

As we’ve mentioned before, diamonds have a terrible history of exploitation and suffering for both people and the earth.

This is not even to mention that the price of diamonds is artificially and unfairly inflated to keep that “luxury” value that most millennials just don’t buy into.

Millennials have grown up in a world watching people be exploited, stomped down, and forgotten, and they’ve had enough. Therefore, most millennials are more likely to buy something that is cruelty-free or cheaper and more simple (such as a wood or metal ring) in order to prevent “buying into a cruel industry.”

This frustrates many major corporations who are dropping in sales as millennials begin to take over the consumer market.

Another thing that millennials are doing differently is marriage.

That’s not to say that millennials aren’t getting married, but the idea of marriage is getting pushed to the backburner as millennials work hard to deal with mountains of student debt and unemployment.

The average millennial struggles to buy the house, the white picket fence, or even afford children, so marriage is turning into a much bigger and scarier decision.

More often than not, millennials will have a wedding without a diamond right in a backyard setting as cheaply and as beautifully as possible, or they will simply live together without ever actually getting married.

This can put a huge damper on an industry that is mostly dedicated to the idea of engagement and weddings – and even if millennials are getting married, they won’t be buying big diamond rings if they can help it.

Are Second-Hand Diamonds a Better Choice?

Secon-hand diamonds are a great choice for people who are looking for a less cruel or carbon-footprint way to get a diamond.

While those diamonds most likely come with a dark history or past, there are many benefits to buying second-hand.

First, the cost is much better. Often, diamonds that are second-hand are even free and get passed down in a family line from person to person.

Diamonds that you can find in a shop will usually still be a little pricey, but depending on the size of the diamond, you could probably stay below $1,000.

However, you want to make sure that the diamond you are buying second-hand is certified and genuine.

Otherwise, you could be paying a few hundred dollars for a pretty piece of glass or quartz.

Are Lab-Created Diamonds a Better Choice?

As we’ve mentioned, lab-grown diamonds are still cultivated and transported using a lot of resources and energy, adding to the carbon footprint that the world is constantly churning out every single day.

However, if you had to choose between a blood diamond in Africa and a lab-grown diamond, many would argue that that is the better choice. More often than not, it is best to get second-hand diamonds or pass them down through a family line.

Diamonds really do last for a long time, and more often than not, it is cheaper to get it polished and fixed up for the next person in line than it is to go buy a new one.

The Dark Side of Diamonds – NPR

5 Industries Millennials Are ‘Killing’ (And Why) – Forbes