A bridal shower is a great way to celebrate a soon-to-be-married couple. Food and gifts help the couple start their new life together.

Here’s the Rundown on Men at Bridal Showers:

Guys go to bridal showers, but it all comes down to your personal preference. The father of the bride, the groom, and even the groomsmen can be invited to the bridal shower if that is what the engaged couple wants. It all depends on your wants and needs for your special day. 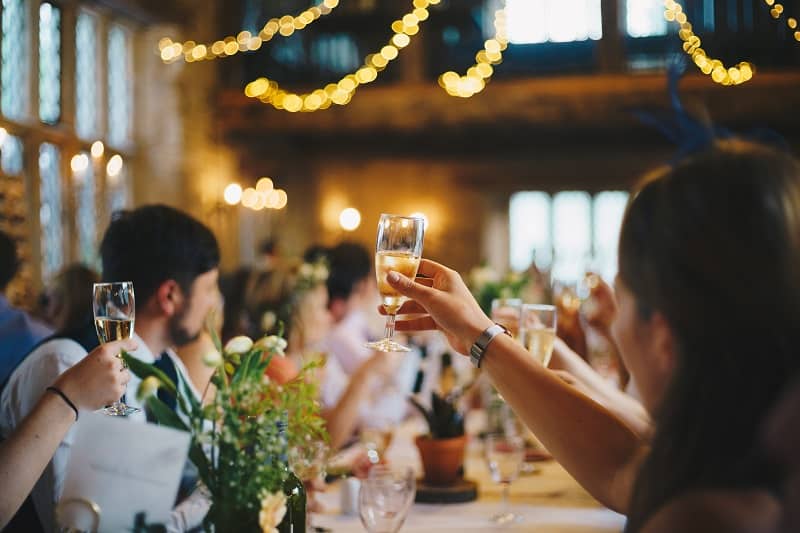 Who Exactly Goes To Bridal Showers?

A bridal shower is traditionally thrown by the bride’s mother and her maid of honor and is hosted by the entire bridal party.

When it comes to who to invite, it is generally an open invitation to any female invited to the wedding.  From distant cousins to your old college friends, everyone will be invited!  But, how did this tradition begin?

Bridal showers first picked up popularity in Poland back in the 16th century.  The idea was for people to come and give gifts to the couple to wish them luck in their lives.

This party was open to everyone regardless of gender; however, Bridal parties in America started getting popular in the 1930s and were open to women only.

This is because back in that time, the role of a woman was traditionally a housewife, so events like bridal parties were left to women only.  In more recent years, the lines between gender roles have blurred.

Does The Groom Show Up To The Party?

Traditionally, the groom will not be showing up to a bridal shower. However, some couples are starting their traditions for bridal parties.

By advertising the event as a “wedding shower,” couples can invite all of their close friends and family regardless of gender so that everyone can take part in the fun.

More recently, it has become acceptable for the groom to make a “surprise” appearance at the end of the shower.

Traditionally this is done so that the groom can thank the people and help the bride load up the car with all their new gifts and goodies.  For example, my husband showed up in the last 30 minutes at my bridal shower!

This helps to make it a couple’s event and takes a little bit of pressure off of the bride.

This is especially true if several of the groom’s family members attend the shower.  It can be awkward for the bride to host the party alone when they don’t know the other side of the family that well.

When Can It Be A Good Idea To Invite Guys To The Bridal Shower?

While bridal showers are still considered a “female only” event, the tides are turning slightly.

In some cases, the bride has a close male friend be their “bridesman” or a “man of honor” in the bridal party.  In this case, it is more than okay to send them an invitation to the bridal shower.  This is because it is the bridal party that will host this event!

Another instance where it is more than fine to invite the guys to the bridal shower is if the bride wants them there.  You must remember that traditionally, a wedding is seen as the bride’s big day.  So, whatever she says goes to the events surrounding the wedding.

You often see this with brides who have a very close relationship with their father.  Many brides want their dad by their side for every wedding celebration.  This isn’t such a crazy thought since the bride’s father has such a large role in the wedding ceremony itself.

If you’re like me, you are okay with bucking tradition and making your own rules.  This is why many couples have chosen a “Jack and Jill Shower” hosted by both the groom and the bride.

What Do Men Do At Bridal Showers?

I’ve been to all kinds of bridal showers.  I’ve been to ones strictly for women and plenty of ones for the couple.

It is always fascinating to see how men behave at these events.  Traditionally, they haven’t seen this side of wedding celebration so that things can get a little wild.

Bridal showers are usually full of party games like trivia about the couple or even a couple of rounds of shower bingo.  Men invited to the shower should feel more than welcome to participate in the same games as everyone else!

Traditionally, showers are pretty girly.  The decor is always bright and sparkly, making anyone feel a little out of place.  That’s why I suggest you try to make it more gender-neutral if you plan to welcome more than just females to your party.

I once was in a shower where they had the main party in one room and the games in the other! This way, guests who are not into the gaming side of things can spend the day doing something they enjoy.  It is all about the experiences that you create for your guests.

For a non-traditional bridal shower, consider how your guests feel and what experiences will help them be comfortable.

What Would A Groom Wear To A Bridal Shower?

You may be frantically searching through his closet to find that perfect outfit for your groom, as bridal showers tend to have a dress code.

This code is that the dress should be nice but not fancy.  An afternoon garden party attire is generally the dress theme you seem with most bridal showers.  Girls tend to wear dresses or jumpsuits that are not too loud but still give off a classic vibe.

So, what should a man wear to a bridal shower?  They should follow the woman’s lead and stay true to the theme!

Light-colored slacks like a tan or gray, paired with a sharp top, are all your groom needs to fit into this traditionally floral event.

In simpler terms, tell your guy to dress as if he is going out to a nice lunch with his family.  You want the groom to be comfortable since he’s probably already feeling a little out of place.

Your best bet would be to lead the way when it comes to bridal party fashion!

Do Grooms Get A Shower?

Having an event like a bridal shower can feel like you’re leaving the groom and his boys out to dry.

Couples are making their traditions and paving their path to married life!  More recently, parties like “bro-dal showers” are popping up.  These are just like bridal showers, but with a manly twist.

Bro-dal showers are showers that are held from the groom’s perspective.  While these can replace traditional bridal showers, I think it is more fun to have both.  The only thing better than one great party is two!

Instead of a round of bride bingo, how about a game of groom flip-cup?

Tradition shows that the gifts are often meant to be used around the house at a bridal shower. This includes china for special events as well as popular kitchen appliances.

In the case of a bro-dal shower, people tend to gift the groom with things that make them a valuable part of the household. This includes tools, lawn care equipment, and even a brewing kit!

Gifting the groom with traditionally useful things for a “honey-do list” is a great way to make the groom feel special.

I love breaking gender roles and stepping outside the norm for the bride and groom.

You want to find the perfect balance between tradition and modern times if you’re like me.  No rule says you can’t twist certain traditions to fit perfectly into your lifestyle.

You and your groom need to be on the same page.  Compromise will play a large role in your married life, so why not learn how to compromise before the two of you even say, “I do?”

It is your life and your shower.  Only you should decide just how that will look for you as a couple.

Instead of seeing a bridal shower as an exclusively female event, make it whatever you want.  This doesn’t mean that you have to buck tradition completely.  It just means that you are making a tradition work for you.