Despite what many people think, men are capable of a huge spectrum of emotions – anger, love, shyness, nervousness, happiness, sadness and many others are only just part of their pool to choose from.

It is a huge misconception that men don’t blush, cry, feel shy or uncertain about themselves. In fact, men have many insecurities and difficulties expressing their feelings – especially to people they may like or have a crush on.

Because of this, we don’t often know how to handle men when they do show a great deal of emotion – and that’s sad!

Men are amazing creatures who deserve more love than they get, so it’s important to react positively when they show us their softer sides.

Why does he blush around me?

If your friend, husband, significant other, or new acquaintance blushes around you, it could mean many different things. Depending on the situation, the flushing of color to a man’s face could mean embarrassment, attraction, anger, and even uncertainty.

Context clues are incredibly important when understanding someone’s feelings, and you should never ever jump to conclusions.

Instead, talk to them! They may be open to talking about their feelings if you are kind and compassionate about it. 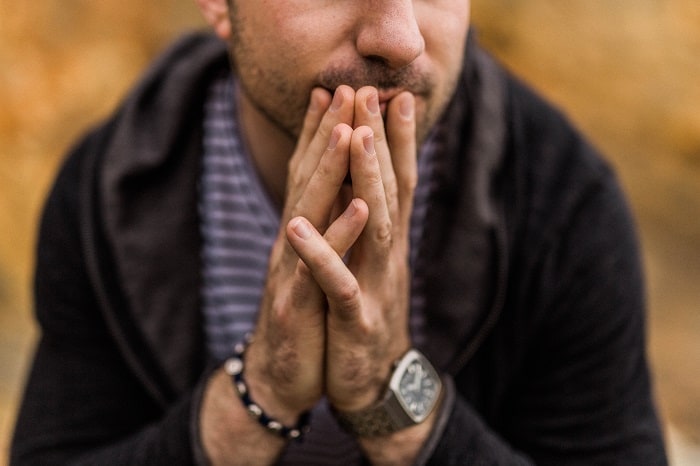 What Does it Mean When he Blushes Around Me?

There are so many different things that can cause a person to blush or flush color to their face.

This is a huge chemical reaction that is directly tied to powerful emotion, whether a positive or negative one. For example, if you are furious with someone, your face may turn red, which can be confused with blushing. You can also flush red with embarrassment or shame.

The cultural association with “blushing,” however, is usually reserved for romance or attraction. Most people assume if someone is blushing, they are experiencing a crush, passion, or shyness around the person that they like.

However, misreading a blush or reddening of the face could have severe consequences on your relationship, so make sure to communicate with your partner.

You should also start paying attention if he calls you love.

Differences Between “Blushing” and “Turning Red”

Like we mentioned before, about fury or shame, turning red or flushing with color can be very visually different compared to a blush.

Turning red usually means your entire face, to the tips of your ears, has turned pink or red. This can be a much more powerful emotion than a regular blush, which is usually confined to the space beneath your eyes or cheeks.

While this isn’t the hard-and-fast rule, and some people blush bigger than others, it is important to know the difference. You don’t want to accidentally assume the person you are talking to is attracted to you when they may be embarrassed or angry, and vice versa.

Most of the time, if someone’s face turns entirely red or flushes with color, it could mean that they are in emotional distress, very angry, or embarrassed.

If this is the case, consider backing off of the conversation to check in with them, or to apologize if you have offended them.

If He is Blushing, What Can it Mean?

A real “blush” – the kind associated with passion, romance, attraction, and shyness – can be a very cute look on someone you find attractive, especially if they are also interested in you, too.

Conversations that are taking a flirty or fun turn can cause the man you’re interested in to blush if he likes you, too. This can be a huge and exciting development in an early relationship or a fun moment in a current relationship.

It means that his affection for you is strong enough to cause a chemical reaction that causes blushing. That’s a great thing!

It can also mean that you’ve said something that has made him excited or shy. Blushing is a great sign to know that the conversation is going well and that he is having a great time.

Don’t just jump to conclusions, though. If your significant other is blushing but looks uncomfortable, he may be shy or unsure how to proceed in a given situation.

If that’s the case, talk to him! Open communication is never a bad thing!

Furthermore, it gives you an excuse to open up about your feelings, too.

Is it Always a Good Sign When Guys Blush Around You?

If a man is truly blushing in regards to you, it can be a good sign, but there are also things you need to watch out for.

It can mean that he is interested in you, enjoying the conversation, unsure how to proceed with his feelings, or is deeply invested in you and what you are saying.

However, there are also negative things that can come across from blushing. As we mentioned before, a person’s face turning red can mean that he is upset, angry, or embarrassed.

If you feel the conversation has taken a bad turn, this could be one of the reasons he is turning red.

Therefore, while blushing can mean something incredibly positive, there are also reasons why he could be turning red. You’ll want to make sure to keep a note of context clues in order to make sure that he is blushing for the right reasons.

As always, be sure to check in on him and make sure he is alright!

People have emotional reactions to a lot of things, but blushing doesn’t always come from how you’re feeling.

Sometimes there are reactions to the environment around you or certain exertions you put your body through.

There are many reasons why someone could blush, whether that is for affection, anger, shame, or other reasons that we’ve listed below:

Weather patterns and other severe changes on the body can cause someone’s face to heat up or become red with cold. This is a natural response.

Blood rushes to the face in these circumstances to help protect or cool the body as a result of any major changes. It is normal to come in from the snow with rosy cheeks or to turn red on a hot, sunny day.

Furthermore, running or exertion can cause your face to turn red as blood rushes there. Make sure that you’re well-hydrated and cool down properly after a run.

Finally, there are instances where intense fear or confusion can cause someone to flush red to their face, especially when their complexion is pale. If that’s the case, there may be something seriously wrong, and you should make sure they are alright.

Even happiness and being thanked can make someone blush!

These small chemical reactions can be very powerful in your body, and because blushing is tied to emotions, it is even more noticeable what you feel when it happens.

Why Do Girls Blush More Than Boys?

There is no evidence to say that girls blush more than boys.

In fact, blushing is such an involuntary reaction to a strong emotion that it would be difficult for a man or woman to hide it if they were to blush.

The thing is, it is widely accepted by Western culture that women are more “emotional” than men, and therefore the misconception that women blush more stems from that.

Instead, it may be that men are better at hiding the fact that they are blushing behind facial hair or turning their faces away when it occurs. Women, on the other hand, are taught that they are supposed to be more emotional and caring, open about how they are feeling.

Therefore, it may mean that it is easier to see a woman blush because she won’t try to hide it or turn her face away. Instead, women are told to embrace their emotions and to be open about them – to communicate.

Men, sadly, are stereotypically preconditioned to show no or very little emotion. Luckily in these modern times, that is no longer the case, and it is widely celebrated when men show their happy, sad, nervous, or shy sides.

Because of this, it is probably more common to see a woman blush, but that doesn’t mean that men don’t.

It just means you have to look a little harder for it!

Blushing is a totally normal and human reaction to powerful changes that occur in the body.

Whether those changes are physical, emotional, or otherwise, blushing can mean many things.

If you are having a conversation with someone and they begin to blush, consider the context clues that lead you here, and don’t forget that the most important part of communication is asking someone how they are doing.

Finally, embrace the idea that men want to show a little more emotion.

They don’t get enough credit for their compassion, kindness, and even their blushes!